You are here: Home » About » Clergy & Staff » Shaliach 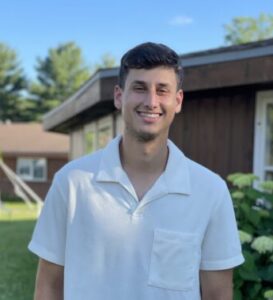 Snir was born in Tel-Aviv and raised in Holon. Before becoming a shaliach (Israeli emissary), Snir volunteered in his neighborhood’s community center as a youth counselor, where he led and mentored youth groups of different ages. He served in the Israeli Defense Forces (IDF) as a drill sergeant, later becoming a staff sergeant in BHD 11, the IDF’s training base and school of Human Resources. He worked with new recruits joining the IDF, teaching them the basics of serving in the army and much more. After his service, Snir worked at Olin Sang Ruby Union Institute, a summer camp in Oconomowoc, WI for two summers. He was a counselor in the chalutzim (Pioneers in the building of the State of Israel) program, a Hebrew immersive program for rising sophomores and juniors, and as Sgan (second in command) in Avodah, the camp’s Counselor in Training program. He also worked at Alexander Muss High School in Israel, a boarding school in Hod Hasharon and was a counselor of a group of seniors (class of 2022) from Charles E. Smith Jewish Day School in Maryland during their semester in Israel, teaching them about Israel, Judaism, and their Jewish identities. Snir enjoys working out, hiking, cooking, and reading. He’s also very into film, television, and filmmaking. He wanted to become a shaliach to create meaningful and deep relationships with Jewish youth and young adults in the Greater Washington Jewish community and help them navigate growing up and shaping their Jewish identity and relationship to Israel.

Snir joins Temple Emanuel through the support of the Jewish Federation of Greater Washington’s Community Shlichim Program. Thank you to the Federation and the Jewish Agency for supporting this important program. 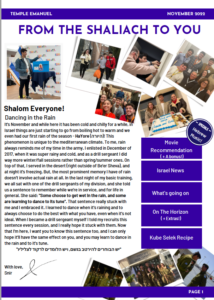 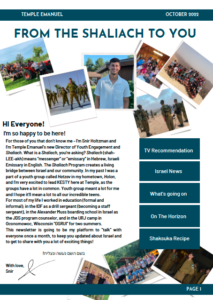